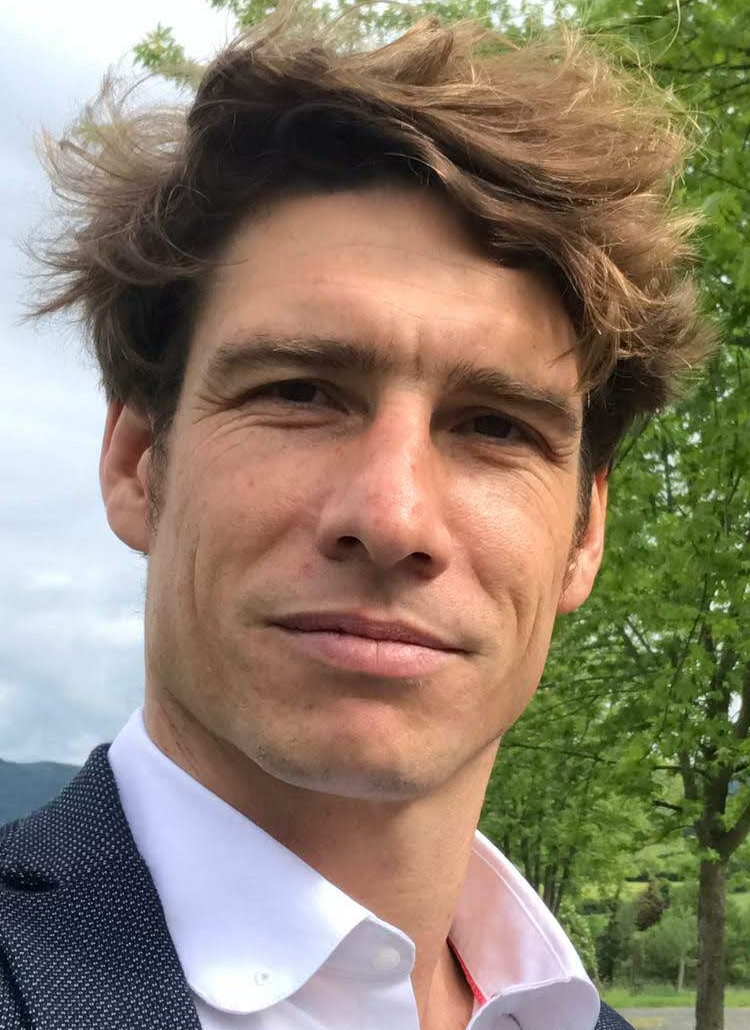 I am a postdoctoral researcher at the Laboratoire d'Hydrodynamique de l'Ecole Polytechnique (LadHyX), working on the transfer of energy through scales in rotating and stratified flows.

I also work in the study of turbulence mixing of stratified flows through high resolution DNS with Alex Delache and Louis Gostiaux , from the LMFA at Ecole Centrale de Lyon, and Antoie Venaille from the ENS de Lyon.

In addition, I keep collaborating with my former supervisors Sylvain Joubaud and Philippe Odier in experimental work related to my PhD thesis done at the ENS Lyon. We are working in collaboration with Nelly Pustelnik in developping a variational mode decomposition method for estimating critical reflected internal waves. With Felix Beckebanze we are describing a theoretical framework for experimental observations of particle transport induced by internal wave beam streaming in lateral boundary layers, done with Diane Micard .

Turbulence in the ocean and atmosphere is dominated by stratification and rotation. Understanding how the energy is transported from large eddies to the small dissipative scales would improve the modeling of the unresolved scales in meteorological and oceanic models. We use a stratified tank set on a rotating table and direct numerical simulations to study stratified and rotating turbulence. The turbulence is produced by the interaction of multiple columnar vortices.

The combination of stratification and rotation produces a particular type of turbulence, with a dual cascade of energy towards the large scales and small scales where the energy is dissipated. The eddies are large (see horizontal plane) but with a small thickness that induces strong shear and the formation of small scales (see vertical plane). 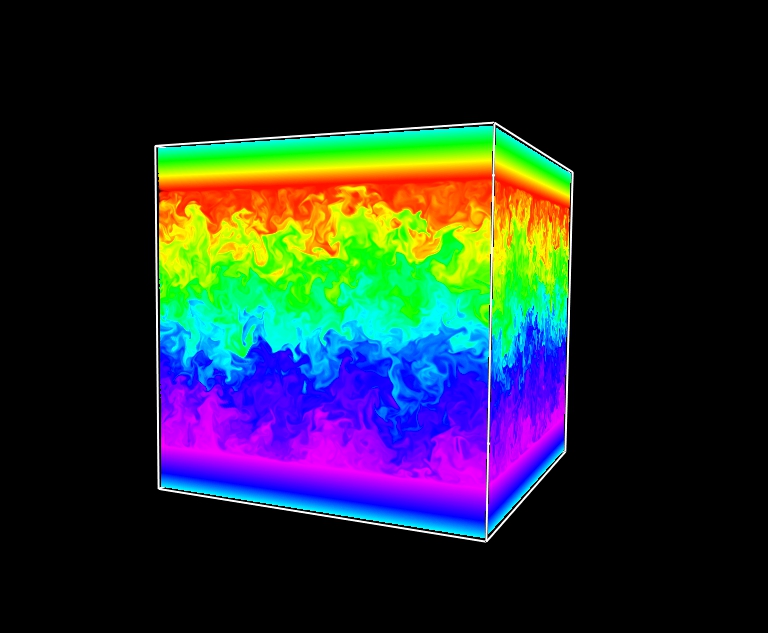 Figure: Snapshot of a 3D buoyancy field of a turbulent decaying flow with initial linear stratification.

Stratified fluids are common to many geophysical and industrial environments. The dynamics of these systems are driven by the complex balance between turbulent decay, buoyancy restoring force and irreversible mixing ; where the local mixing can produce an effect in the global energy budget of the system.

In particular, turbulent mixing in the ocean interior plays a crucial role in its global energy budget. This mixing partially drives large scale dynamics, as evidenced in the meridional overturning circulation (Wunsch and Ferrari (2004)). In addition, vertical transport in the ocean is substantial for sequestering large quantities of dissolved greenhouse gases from the atmosphere to the deep ocean. The proportion of energy transferred from turbulent structures to effective mixing is very difficult to estimate through observations (Ivey et al. (2008)), and the details of this energy transfer is yet not fully understood.

In order to resolve irreversible mixing produced by turbulence in a stable stratification, we introduce boundaries at the top and bottom of our domain which allows the mean stratification to evolve in time. This differs with the classical approach of homogeneous stratified turbulence where the background stratification is fixed. The main interest of our approach is that the irreversible mixing is directly computed from the full density field. A porous penalization region is introduced to take into account non-flux conditions at the bottom and at the top of the box (see Kadoch et al. (2012)).

Watch a video of an internal plane wave propagating in experimental conditions here.

When difference of density exists within a fluid, it will tend to redistribute driven by the force of gravity so that the lighter fluid remains above the heavier forming a stable stratification profile. This particular configuration will be stable in time and if not perturbed, static. When the fluid is slightly vertically displaced, it will feel a buoyancy restoring force acting in a direction opposite to the displacement. The force will act as a spring, and therefore the fluid will oscillate around an equilibrium position. These oscillations are know as internal gravity waves, which differ from the well known surface waves, as they occur inside the fluid where the density of the fluid changes continuously.
The atmosphere is stratified in temperature, and the ocean is stratified in both salinity and temperature. The main motivation for understanding the dynamics of internal gravity waves is that they occur naturally in these systems. These waves have an effect over the dynamics of stratify systems, and may be taken into account to be able to better predict large scale effects such as transport of energy and matter.

Thanks to several experimental techniques internal waves can be generated and observed in laboratory conditions.

Watch a video of an internal wave near-critical reflection in experimental conditions here. 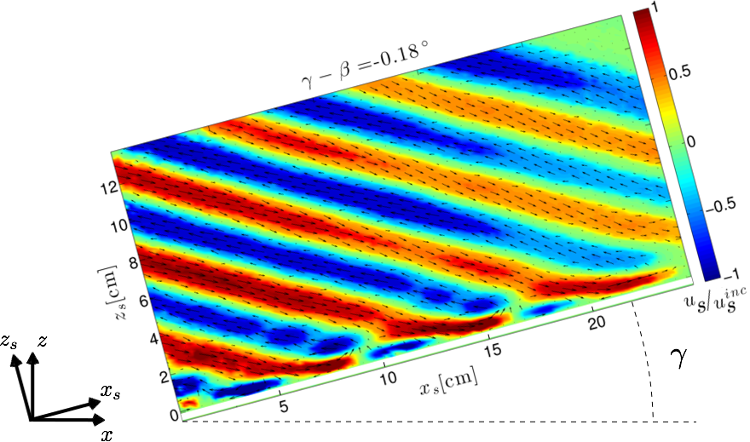 Figure : Velocity field of an internal wave near-critical reflection. The incident wave is coming from left to right, and the generator is located 30 cm from the center of the image.

The peculiar dispersion relation and the nonintuitive relation between group velocity and the wavenumber of internal gravity waves lead to some very unusual physical consequences. In particular, when internal waves are reflected on a sloped boundary the frequency is conserved, and therefore, its angle of propagation. In consequence, nonintuitive effects including reflection, focalization and wave attractors will emerge when internal waves interact with boundaries.

The detailed study of this process is principally motivated by the peculiar characteristics of internal waves reflection that can enhance the shear stress developed near boundaries and therefore generate erosion of particles settle at a boundary.

Many observational studies have been done that indicate that internal gravity waves are a cause of sediment resuspension, as for example Bogucki et al 1997., Quaresma et al. 2007 and Hosegood & van Haren 2004. In every case the capacity of generating sediment transport through the interaction of internal waves over the seafloor is limited by the shear stress generated at the boundary and the physical characteristics of the particles 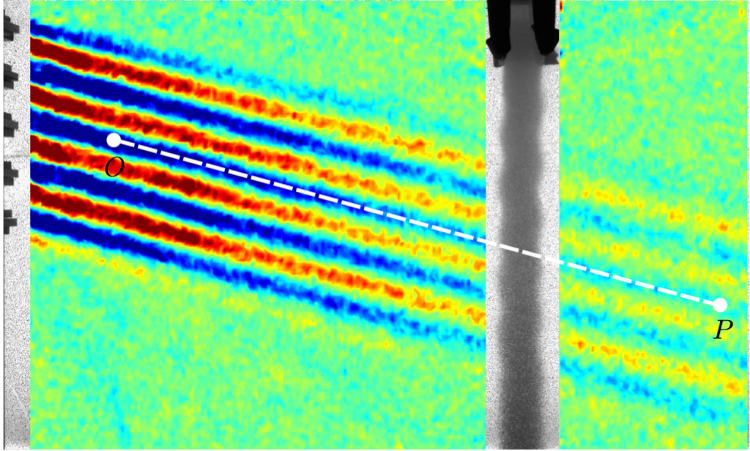 Figure : Internal waves passing through a column of particles in suspension. The boundaries of the column are perturbed by the pass of the wave. 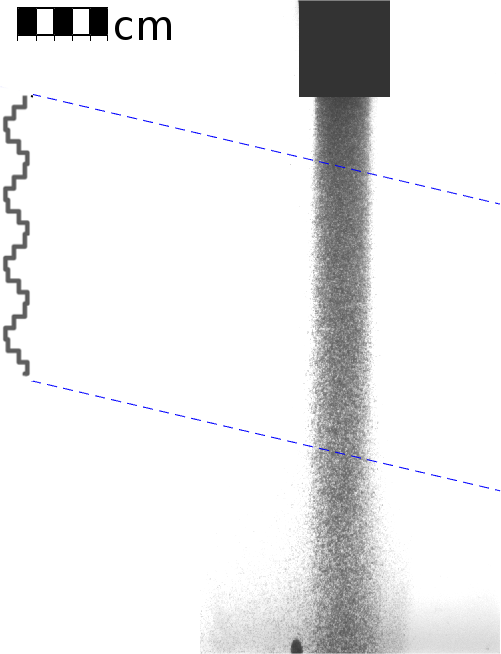 Figure : Snapshots of the front view of a column of particles in suspension in a linear stratified fluid. Time evolves from up-left to down-right. The snapshots are taken every 5 periods of the internal waves (T=25 s). The wave generator is turned on for the first snapshot. With blue dashed lines is indicated the borders of the wave beam. The column is displaced towards the wave generator.

You can find my curriculum vitae